Carpe Diem  Seize the Day
Here is one of the most recent developments of the Biz World , with the new CEO , Satya Nadella
Indian Americans don’t need Satya Nadella — the Hyderabad-born techie named Microsoft’s CEO today — to feel good about themselves. Look around the U.S. and you already see “desis” in leading positions, and not just in the Indian-heavy IT sphere where Nadella has soared. Indian Americans are CEOs of Fortune 500 companies, agenda-setting lawyers, celebrated comedians, prominent politicians, beauty-pageant winners, TV personalities and, heck, top editors at some of America’s most venerable publications.

The stereotype of the hardworking model minority has evolved: sure, Indian Americans still win spelling bees, but they also rap and smoke weed on camera. As a group, Indian Americans comprise the wealthiest and most educated single community in the U.S., a position of societal prestige that may last for some time yet — a recent survey found that no ethnic group in the U.S. saves more for their children’s college education than Indian Americans.

Nadella’s journey to Microsoft’s top post moved along the same path furrowed by thousands of other Indians — a hypercompetitive college education in India (though his university was only a midranking one), followed by graduate studies in the U.S. and a berth in Silicon Valley. But the application, the ingenuity, the business savvy and the drive that saw him excel were all his own. 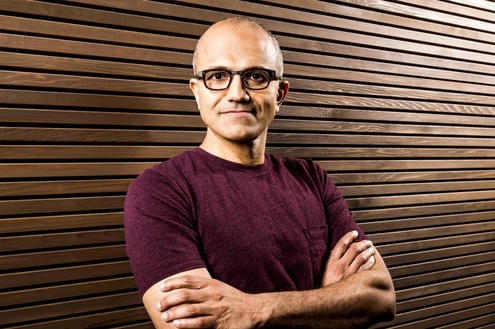